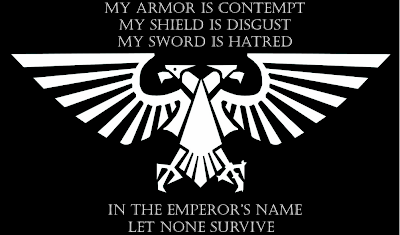 Rationale: The way I think the Imperial Navy functions best is in the shield wall/torpedo shotgun method; some call it the steamroller or sledgehammer. Many people prefer using Nova Cannons with the IN fleet but I am not in favor of them. I personally like the redundancy of having almost all my ships armed with torpedoes so I can get close and shotgun them. Nova Cannon vessels will have to stay back to be of good use and I prefer not to divide my fleet. Also, I like of using the prow ram upgrade to give them batter ramming capabilities. The only ships that I will pay the points for 60cm range will be the lances that come stock on battlecruisers and battleships and the Emperor battleship (which I do not use often). Most of my choices come in pairs because the IN works best in pairs. I start with 2 Lunars as the core of my fleet. They are quite well-rounded and have proven to be very powerful when used well. After this, I usually add 2 Dictators, my favorite carriers. Dictators can reload their torpedoes and their launch bays with one reload special order and I really like that ability. Plus, they can smash something really hard point blank with their torpedoes, then hit it with bombers when their turrets are all used up. So far, I have 24 torpedoes, 8 launch capacity (on the Dictators) for fighter protection and bombers, and lots of close range firepower. This gives me a great base fleet. Other ships I like to use in this style of IN fleet are Retribution battleships (almost every game, especially with the BFG:R rules with 18 weapon batteries on each side), Armageddons (my favorite battlecruisers), Overlords (they are growing on me), Swords (very powerful escorts when used wisely), Cobras (just like the Swords), Dauntlesses (both variants), and Vengeances. Make sure you have a decent Admiral in this fleet (preferably ld 9) and 2-3 rerolls. 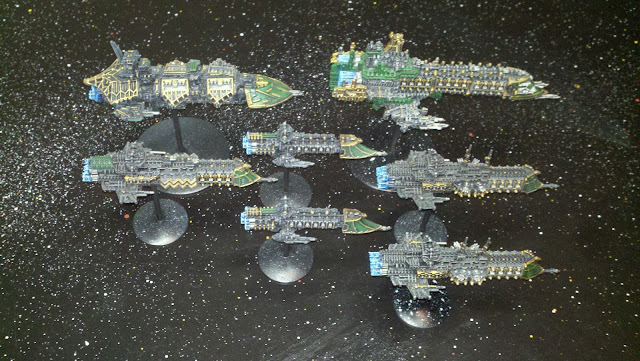 Phase 1: Closing. Deploy in a shield wall (straight line of cruiser pointed directly at the enemy). My main tactic is to all ahead full right away to get as close as possible and use whatever long range dorsal lances I have to blast something important on my way up to the enemy fleet. Protect your Dauntlesses and escorts by keeping them behind your shield wall of ships.

Phase 2: When I can get close enough, I will most within 30cm, turn my ships in a way that will allow me to ram them next turn if they are in the way, and point blank shotgun them with torpedoes and bombers. If you set it up right, you will be able to torpedo things and have at least one of your broadsides available to shoot another target. Get your escorts into an advantageous position and remember that they can turn 90 degrees and turn before they move. You eventually want to be behind the enemy to avoid their shooting. Cobras can join in the shotgunning but be careful with them. Torpedo Dauntlesses too.

Phase 3: Breakthrough: Eventually, you want to smash your way into the middle of them, either by ramming your way through (ramming can do tons of damage) or moving into a gap in their fleet and utilizing both broadsides on them. By this time, you should have caused tons of damage. 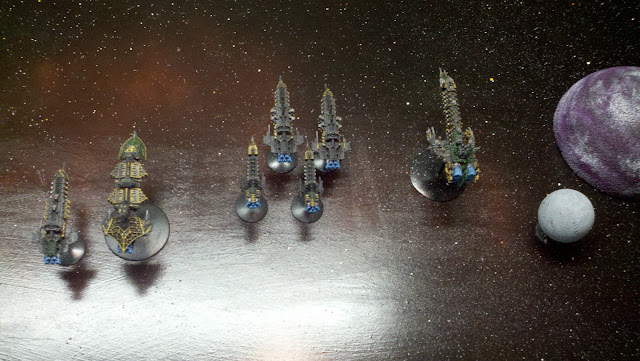 -I find it very hard to leave home without some escorts. Yes, an entirely cruiser fleet is really durable, especially with a 6+ prow, but the IN fleet isn't the fastest fleet and certainly isn't the most maneuverable. Make sure you have some escorts, or at least some Dauntlesses. Trust me, you will need it. I like to have 4-5 Swords or Cobras lurking around, mostly Swords (especially when original rules Eldar may be an opponent).

-Dauntlesses. One of my favorite ships in the entire game. Especially in larger games, Dauntlesses get that much better. Here is why. When you have a lot of hefty targets to shoot at, Dauntnesses tend to go unnoticed. Some enemies will notice the Dauntlesses as easier victory points than regular cruisers (which they are) and go for them. Here is how I get the best out of Dauntlesses. First, when I am making a list of 1,500pts+, I ask myself, am I really light on lances? If so, I take 2 lance variant Dauntlesses to fill that gap. 2 locked on lance Dauntlesses can do a hefty amount of damage (4-5 hits on average) and tend to be a sneak attack when the enemy isn't looking. If you don't need more lances and you think you have that area covered, get the torpedo variant. 220 points for 12 torpedoes which you can launch in 1 wave (while base to base). 12 torpedoes can do tons of damage, especially because they ignore shields. What happens if you have 2 Lunars, an Armageddon, and 2 Dictators, all in a shield wall? Well, why not take the torpedo Dauntlesses anyways? Either variant can be used well but I am starting to prefer the torpedo variant over the lance variant myself nowadays. Here is how I use them. I keep the behind the main shield wall about 10cm or so back. If they are in range to be targeted, most likely the enemy have bigger problems to deal with. Also, they will have to pass a leadership test to target them. This makes them less likely to be targeted, and good thing with that 5+ prow (their main downside). For the torpedo variant, use their maneuverability to shotgun something like an escort squardon or some ship that needs more shotgunning than you can give them in that turn. For the lance variant, I usually keep them near the sides and will target the cruiser (most likely) that I am able to target with some of my ships' broadsides. I usually try to hit something near the side with my Retribution and I tend to target the same thing with the Dauntlesses lances. Conclusion: Dauntlesses are great, especially in bigger games and very small games (in which I recommend the torpdo variant).

-In any game above 1,000pts, I am going to be taking a battleship and for this style of list, the Retribution is my choice (Emperor is we aren't using BFG:R rules). The reason I like the Retribution so much is because it works well with this type of IN tactics; 6+ prow, huge weapon batteries on the sides (BFG:R), and 9 (!) torpedoes; the only real line battleship the IN has. With the Emperor, I tend to keep it back and shoot through the wall. Not the Retribution! I put it front and center. Why would I take a battleship over 2 cruisers? It really just comes down to 4 shields and it looks awesome. It is intimidating looking, tends to take a lot of fire, and the 4 shields help deal with the problem well. Regular cruisers have 2 shields which can come back once you move off of blast markers. A battleship has 4 and all 4 come back when you move off of blast markers. That's a lot of hits regained every turn. Try one out for a few games and you will see why this is so important and makes a battleship so difficult to kill.

-Squadron everything but your battleship. This will allow you to deal with a lower leadership cruiser if you happen to roll a low ld, and allow for turret massing and combined torpedo fire. Ultimately, you would like to get each squadron base to base on the turn you shotgun the enemy that first time so you can hit something with a strength 12 torp wave. This means less turret defense (because 2 waves of 6 can be each be shot at by turrets). A wave of 12 torpedoes isn't the best way to go if you are shooting from long range (which I do not recommend) because of 1 fighter or weapon battery shooting taking out the entire wave by itself. When you shoot a wave of 12 in a turn where you are in 30cm range and they hit before the enemy can react, combining waves is a good idea. When I go about list building with squardoning in mind, I like to pair two ships that, when added up, will have good weapon battery amount and good lance amount. Most of the time, I take 2 Lunars (good weapon battery total and 4 lances per side). Also, a Tyrant/Gothic combo works well (plus the bonus of added range from the Tyrant with the sacrifice of some firepower), Overlord/Gothic, Armageddon/Overlord, Armageddon/Armageddon, pairs of Dauntlesses of the same variant, etc. Also, 2 Dictators squadroned is one of my favorite units. 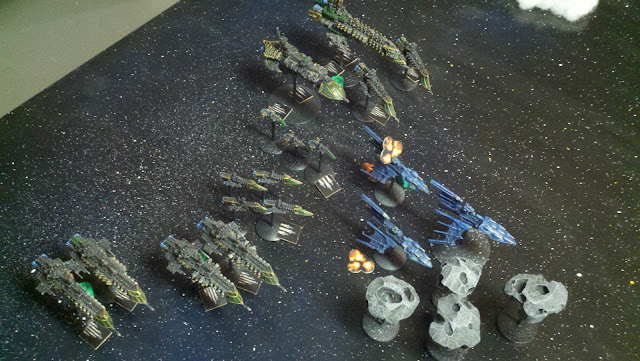 A rounded well travelled fleet. Good AC and long range coverage from the Emperor. Good barrage under 30cm from the cruisers.

This, in my opinion cool fleet, sprang forth from a great Imperial Navy discussion at Warseer:
http://www.warseer.com/forums/showthread.php?196900-Imperial-Navy-How-to-win-in-this-atmosphere

In this fleet the Grand Cruisers and Emperor benefit from eachothers broadside weaponry and 5+ prow. If you like more Attack Craft the Excorcist CG is good option to replace the Vengeance. The torpedo Dauntless are picked to give it the typical IN torpedo supplement.

Escorts are great if used tactically well. Swords are great allrounders with good speed. Cobra's nifty speedy with a good torpedo punch, make sure to use the widowmaker upgrade. Falchions are an unique choice. Useful against AC heavy opponents with using 1 torp to thwart enemy waves.

Under official rules and the FAQ I disagree with (squadroning every ship but a battleship). The trouble of Bracing is a serious one. One ship needs to brace, the whole squadron is braced. Now when using two Lunars squadroning is adviced to maximize offensive power but when using Dominator/Gothic I advice on not squadroning them.