Welcome to the Draco Sector: Specialist Games Global Campaign page! In this post, the groundwork and backstory for the campaign can be found, as well as the starting map. This campaign is for anyone who plays any of the Specialist Games in the 40k realm by Games Workshop. Campaign rules near the bottom!

+Credit+
I would like to thank Bix from "The Veil's Edge" for making the backstory and fantastic maps for the Draco Sector. It makes this campaign possible. Please stop by and thank him at The Veil's Edge Website. Bix has done a lot of work to make this setting awesome and it is ripe for a campaign. He has also stated his intention to continue writing the story of the Draco Sector and may even incorporate the events of this campaign into the storyline!

Let's begin with the backstory: 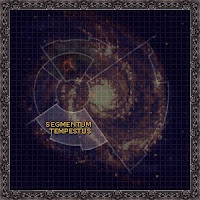 ++Galactic Position++
The Draco Sector is located far to the galactic south along the rimward fringe of the Segmentum Tempestus, at the very edge of the Imperium. The Segmentum Capital at Bakka is many months warp

travel to trailing and the sectors southern reaches border the wilds of The Veiled Region, where the Astronomican fades to but a whisper.


++History++
Imperial archaeologists have found compelling evidence of widespread human settlement in several of the sectors systems, estimated to date back possibly as early as M23. Early Administratum records show that the region entered the Imperium during The Great Crusade, after the prevelant pre-imperial human power, the Coricyn Dominion ceded its territories to an Expedition Fleet of the God-Emperor; compliance was completed and the sector formally recognised in 950.M30.

The Draco Sector was so named, after the stable warp corridor known locally as the Dragons Spine that spans its length; it was divided into five sub-sectors centered around the translation points of the spine, these were Typhon, Scatha, Glaurung, Fafnir and Laverna; the sector capital at that time was established on the old Coricyn home world of Bellerophon.

During the Heresy the sector remained in loyalist hands and reletively unscathed despite uprisings along the Typhon Sub's border with the Vulturnus Gulf; this greatly benefitted the region in the Great Scouring that was to follow. As resources in the fractured Imperium were at a premium, the Draco Sectors largely untouched infrastructure was able to capitalise on the supply demands of the counter offensive, bringing great wealth and power to its noble houses and corporations.

For the next four millennia, the sector enjoyed prominent status within the Segmentum and basked in the Golden Age of the Imperium. In M35 a warp storm of epic proportions erupted in the Laverna Sub tearing apart the local star Moloch and swallowing most of its surrounding system; the loss of these mining worlds cost millions of lives and robbed the sectors industrial powerhouses of a rich supply of raw materials. The aftershock from the storms birth also disrupted warp travel in the region for several centuries effectively cutting off the Laverna Sub and severely hampering trade throughout the sector. The storm that brought so much calamity still rages to this day and has become known as the Nimbus Tormentum.

In M36 the sectors fortunes were in steep decline, the rot of heresy set in and during the late years of The Age of Apostasy in a period known as The Plague of Unbelief, the sector capital Bellerophon was the centre of an uprising in support of the heretic Cardinal Bucharis. The revolt plunged the whole sector into bloody conflict and both the Glaurung and Fafnir Sub's were lost for over a decade. The heresy was eventually quelled a year after the death of Bucharis by Imperial forces returning from fighting on the Hive World of Vaust in the Segmentum Pacificus. Bellerophon never truly recovered from the onslaught.

The Draco Sector today has regained some of its status through moderate stability and good trade, although still a shadow of its former glory; it has many heavily populated and important worlds. Like so much of the Imperium in these dark times of the 41st millennium it must ultimately fend for itself against a myriad of threats from without and within its borders. Dark Eldar raiders are an increasing peril, striking frequently from their accursed webway portals and The Laverna Sub has ceased to be, having slipped from Imperial control; it has become the Laverna Marches, a lawless stretch of space, travelled by Rogue Traders, home to Pirates and far worse.

Many reports suggest that an Eldar Craftworld moves slowly through the Veiled Region, as both Craftworld and Corsair Eldar vessels have been spotted. The Eldar, however, are not the only Xenos threat encountered by Imperial forces.  Recently, there have been increased encounters with Genestealer cults and other Tyranid creatures within the sector. This has led the Administratum to be concerned with the possibility of a full-scale Tyranid Hive Fleet lurking also in the Veiled Region.

Chaos forces have not been entirely silenced, as there are still rogue cults and even rebel/heretical fleets in the sector that still pose a threat. Have these fleets left or are they waiting for the opportune time to strike?

In the last years, the planets of the Draco Sector have been experiencing turmoil in the form of riots, and in some instances, outright rebellion.  The Imperial forces have quickly put the uprisings down, but there have been undercurrents of unrest and a push against the governing authorities. Some say that there are looming Chaos forces lurking in the sector, possibly in the form of a Chaos fleet, and their proximity has been causing these seemingly daemonicly-inspired uprisings.

There has been a theme of dread and a concern for protecting against some impending doom it appears the populace has been made aware of. Astropaths have been experiencing psychic turbulence and often experience haunting nightmares that have led the representatives of the Adeptus Astra Telepathica into a panic, trying to uncover what might be causing such a disturbance in the warp.

The sectors Imperial forces stand ever vigilant against the encroaching darkness, bloodied but unbowed, hoping against hope that this, The Time of Ending is not as many have prophesied, humanity's last stand. But with the increasing alien and heretic threat, has the Time of Ending begun?

++Campaign Rules++
The rules for this campaign will be relatively simple and there is very little for the players of the campaign to keep track of. Heck, you don't even need to sign up! The campaign will take place over periods of time in which I (afterimagedan) and a few other people who will be helping out will take in the results of any Games Workshop 40k era Specialist Game played around the world, tally the results from each faction based on the following score list, and develop the story further! Players will simply play games and report the following to this email address:

...with the following information:

Submitted backstory of this battle in the Draco Sector (1pt for both factions):
++Please include info about your Admiral/General for inclusion in the story!

Campaign Turn 1 is the month of May so get those games started and submitted! More updates and videos soon to come!
Posted by afterimagedan at 5:05 PM