Hey everyone! I've joined a tale of 4 games group on the Spartan Games forum with my Firestorm Armada Sorylians! Here's what I am going to paint for part 1: 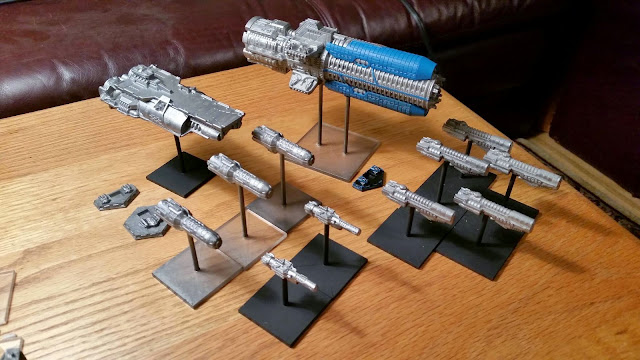 The models are the following:
1 Broadsword Dreadnought
1 Xiphos Carrier with 2 SRS tokens
2 Plumbata (I have the other 3 done)
5 Reapers
3 Kontos

The bulk of the rest of the fleet is near done and I am happy with how they look. I will post some pictures of progress when the time comes.

Posted by afterimagedan at 4:53 PM 0 comments

Proxy List (this page will be updated whenever more options pop up):

Below is a list of ships that I believe work well as proxies for BFG ships, what they look like, and where to get them.

+++Draco Sector Campaign Completion+++
During the end of 2013, I ran into some major setbacks to my hobby time and, honestly, interest. It was hard to focus energy into the game when my grad school work picked up so heavily, combined with the fact that my internship started and my baby girl was near to arrival. So, this is my formal apology for not holding up my end of the bargain with this campaign. I plan on trying again at some point and recruiting more people so that we can keep each other accountable to getting the campaign work done.


So, here is how I would like to end the campaign:

The Imperial Battlefleets, the Adeptus Mechanicus, and the Space Marines were successful in destroying the budding daemonic presence in Ephesus, which halted the powers of Chaos in the sector. It will take years before the planet of Ephesus will come back into compliance, but the Imperial forces in the sector are more than up for the job.

Throughout the turmoil, the Space Marines on San Guisuga raised up their arms in the defense of humanity and brought their might to bear on the Chaos forces of Ephesus. Not only were their fleets successful in driving many of the Chao vessels out of the sector, but they landed the bulk of their force on the surface of Ephesus, to continue their domination in land battles of Epic ;) proportion.

On the surface of Persephone IV, the Orks push forward and make great strides toward forming a mob. If more victories in future skirmishes continue, the Orks will have a substantial force, capable of causing significant havoc on the system. Who knows, maybe even acquiring some Imperial vessels to form a fleet.

The Eldar from Craftworld Mymeara, though suffering heavy losses, have seen recent victories, and have come to be a desperate ally of the Imperium, who has benefitted greatly from their assistance in the space around Ephesus. The Eldar have brought a significant wound to the Chaos fleet and have allowed for the Imperium to fill the cracks.


The fate of the Draco Sector is far from determined, with constant warfare, strife, and rebellion. Many fear that the sector could be lost altogether if a force large enough the damage the Imperial Navy presence there arrives. The Eldar have proven to be an ally of convenience to the Imperium in this recent campaign, but the Eldar are known to switch allegiances at a moments notice. They cannot be trusted. How will the Ork uprising resolve, considering the Storm Troopers on Persephone IV have not been able to quench the growing havoc? What about the Tyranids? Though Genestealer Cults have reared their ugly heads, the feared Hive Fleet that may or may not be lurking in the Veiled Region has not appeared. Does it even exist?

Will the Draco Sector ever return to it's rightful place as a servant of the Imperium? Time will tell. Time... and war...


Here are some of the write-ups that were sent in that I would like to share with everyone:

Landing on the Daeth World of San Guisuga for some dark reasons ha began to dig, and dig and dig...and summoned two gargantuan daemon beasts to protect the site of the excavation from orbital assaults (those were counted as laser batteries on the planet :) )

He was foretelling because, apparently, the Imperial Navy had no intention to let him persecute his plan: another battlegroup appeared above the planet, led by the Retribution class battleship "Admiral Cassius", with the Lunar cruisers "Lady Friederike" and "Steel Paladin", followed by the Dictator cruisers "Holy Halo" and "Gaze of Saint Sabbath", surrounded by a score of cobra cruisers....they engaged bitterly with the fleet of the Arch Enemy, comprised by many fast and deadly Devastation, Murders and led by an old and infamous Repulsive.

The Imperial fleet, determined to deploy troops on the planet to capture and execute the Sorceror Malikai, went all ahead full to the planet, from any direction, creating an impressive wall of torpedoes in the meanwhile.

But the chaotic corsairs made swift repositioning using the planet gravity well, avoiding the brunt of the warheads and pouncing as a wolf pack upon the "Admiral Cassius", broking the great, ancient ship in two pieces, after minutes long barrages.

Seeking venceance, the Cobra Squadrons commanders approached fast into the midst of the chaos fleet, destroying a murder and crippling another with pointblank torpedo hails. The Cobras, however, where all destroyed by swarms of bombers, broadside fire and enemy torpedoes. They did, however, buyied some precious time for the "Holy Halo" and "Steel Paladin" to enter the low orbit, gun blazing and dropships making planetfall!

While the daemonic beasts tryied ineffectively to repel the two Imperial cruisers, the Chaos fleet blocked the "Lady Friederike" and the "Gaze of Saint Sabbath" into a deadly grip. Lances and teleport attacks made short work of the two Imperial ships, left hulking adrift...

In the last stages of the battle, the loyalist ships dropped even more troops on the planet, only to disengage when the full might of chaos was to fall upon them.