This is how it all started...

We had a story line campaign with map based rules modeled after Games Workshop's "Mighty Empires" campaign setting. The rules for the campaign are listed here +++Solar Empires+++. In the campaign, there were 5 factions of humans: 1. Iron Crusaders Space Marines, 2. Imperial Navy, 3. The Inquisition, 4. Fringe separatist humans called Confederacy of Man, and 5. Rebel humans called Terran Dominion.
The Terran Dominion used the Chaos fleet rules and the Confederacy of Man used the Imperial Navy fleet rules. They became such an awesome part of the story line that they have been included in campaigns since the first. Because there is a small amount of role play that happens within our campaign group, I sort of take on a dungeon master role and represent the neutral campaign factions. The Terran Dominion (TD) and the Confederacy of Man (CoM) took on their own characteristics.
CoM, during the first campaign, was an isolated and separatist group who had very limited government (more limited than the American libertarian proponents), and wanted to continue to be separated from the Imperium but were not hostile to it. They did not share belief in or loyalty to the Emperor and intended to keep it that way. Most of their society was comprised of citizens who worked for one of the many massive corporations. The tax that the small government placed on the corporations was to build ships to protect their nation. The players found that it was hard to include the CoM in any of their military operations but when the Tyranids started to became a massive growing threat, they sent their fleet to meet it.
The Terran Dominion, a constitutional monarchy (sometimes benevolent, sometimes totalitarian), was another isolated group with that were a little more militaristic than the CoM.  They, unlike the CoM wanted all Imperial forces out of their sector and saw any Imperial forces as a threat to their power and way of life. Their relationship with the CoM was bipolar and sometimes led to military conflicts. The TD believed that the CoM, being Terran in the small non-Imperial sector, should be united under their empire and work as one to gain power over the entire cluster.
After a few campaigns, we have come to love the CoM and TD and use them in every campaign. Because the CoM and TD are just using IN and Chaos rules, we are getting a little worn down be using them so often. In fact, if the IN end up battling the CoM, it will basically be IN ships vs IN ships. This is a fun battle to have but not over and over. SO, because I love designing new fleets and getting new stuff, I have decided that we will design a fleet for the Terran Dominion using the Ground Zero Games "Scandinavian Federation" fleet. I am writing this post a little bit late because I have already put a lot of work into the TD fleet and we are getting close to playtesting phase.
Basically, some overview concepts/goals that will make the TD fleet unique are these:
-similar to the IN but less torpedo focused and less in-your-face.
-no special weapons like Eldar or Necrons to continue to keep the imperial/human feel.
Weaknesses:
-no nova cannons
-6+ prow but does not help against torpedoes because they are energy based, similar to Tau
-similar to Tau gun layout; mostly front facing guns that can either shoot front or side. This means less firepower overall.
-most be closing to get the most out of them
-no medium cruiser carriers. this leaves them with light cruiser carriers and a cruiser battleship to defend against enemy ordinance.
-as slow as the IN fleet.
-regular leadership chart.
-must use lots of fragile light cruisers and has limited medium cruisers.
Strengths:
-Powerful front firepower
-good range like Chaos, maybe a little less.
-the only other fleet with a Firedagger ship that protects against enemy ordinance (they basically need these, though)
-Powerful light cruisers, though fragile. 1 carrier, 1 lance artillery, 1 in-your-face bulkier Dauntless meets Lunar type.
-lots of long range front lances (similar to Chaos Murder and Hades type fleets)
-a light artillery cruiser that has 90cm lances (this is to make up for the lack of nova cannons
-3 battleship options, 1 Emperor type, 1 smaller Retribution type, 1 mini-planetkiller type (no armageddon gun, sorry)
Check out the models here: Scandinavian Federation
I will post the rules when they are done. These pictures got me hooked on the ScanFed ships... 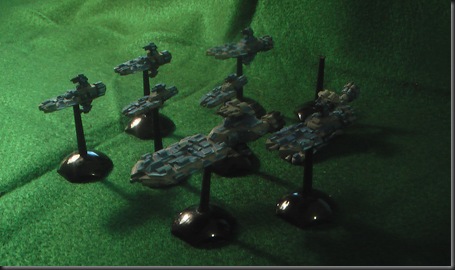 Posted by afterimagedan at 1:32 PM