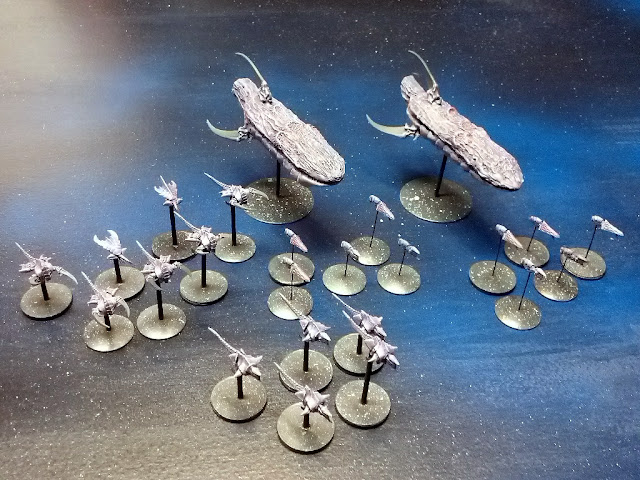 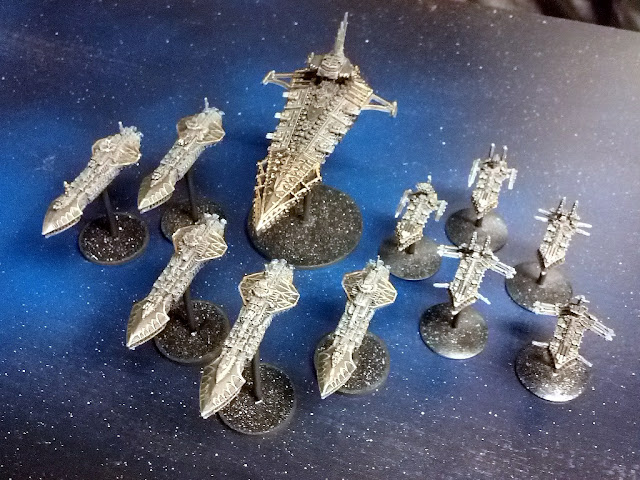 Scenery
The scenery was set up by Gavin as I got all the gear we needed for the battle, along with amazing creepy free ambient space music. Here's Gavin's Space Marine pose: 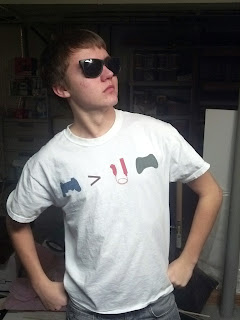 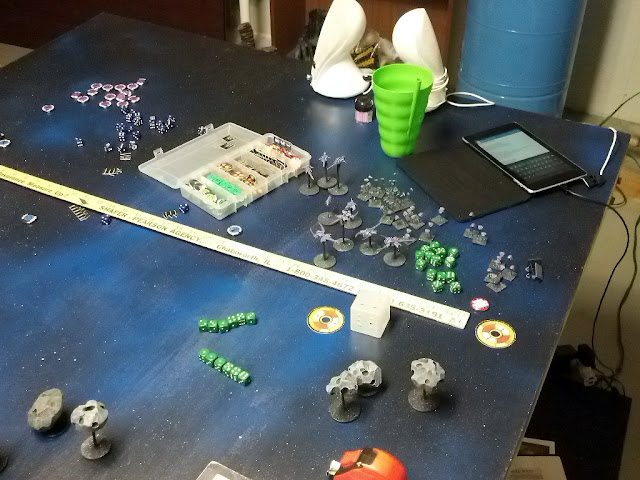 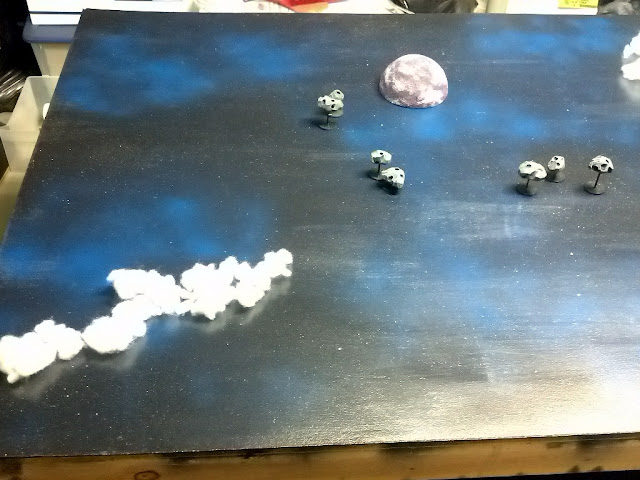 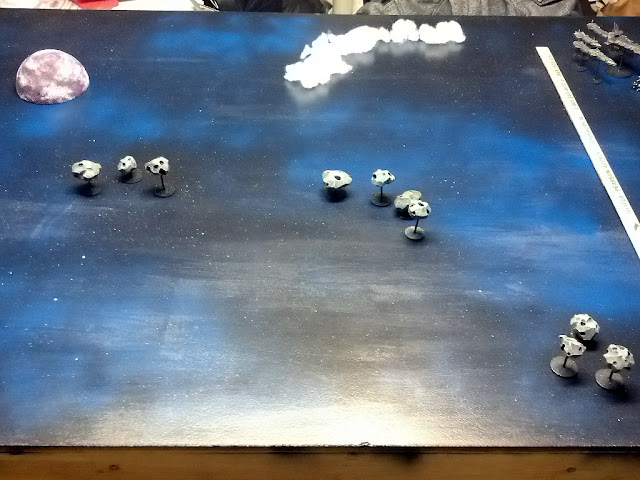 Scenario: Fleet Engagement
Both fleets chose wedge so we deployed under the style B requirements. Gavin (SM) won the roll-off and chose the "north" side with the planet.
The Tyranids (me, duh) were forced to deploy first so Hive 2 was put down. In the end, the Tyranids were clustered and the SMs crowded around the planet, most in its gravity field. 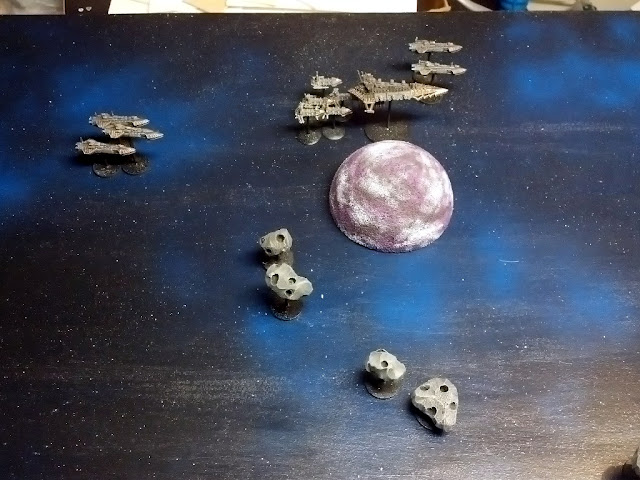 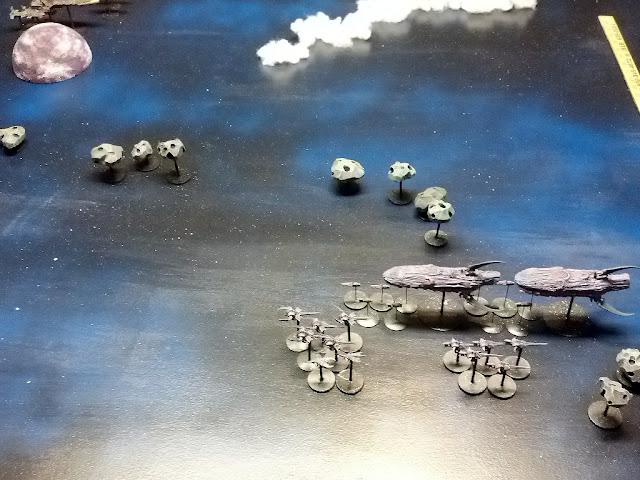 +Tyranids 1+
Just about immediately, I failed my first synapse roll. Luckily, the second hive was there and it held out until the last roll. At that point, I used a RR to make sure I had some good first turn control. With full control of the fleet, I pushed forward to go through a gap in the asteroids and anticipated some early conflict based on the planet being there to allow his fleet to get close with extra turning. 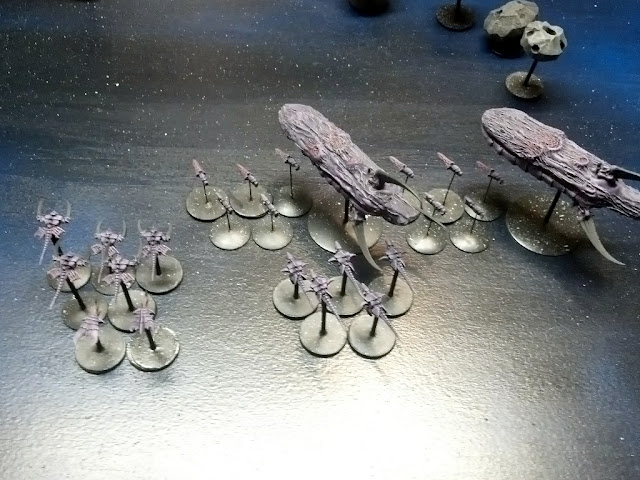 +Space Marines 1+
All Space Marines besides the rear Strike Cruiser squadron used the planet for the free turn. They curved around the planet and launched torpedoes and Thunderhawks, setting up turn 2 to be huge. (sorry about the blurry picture) 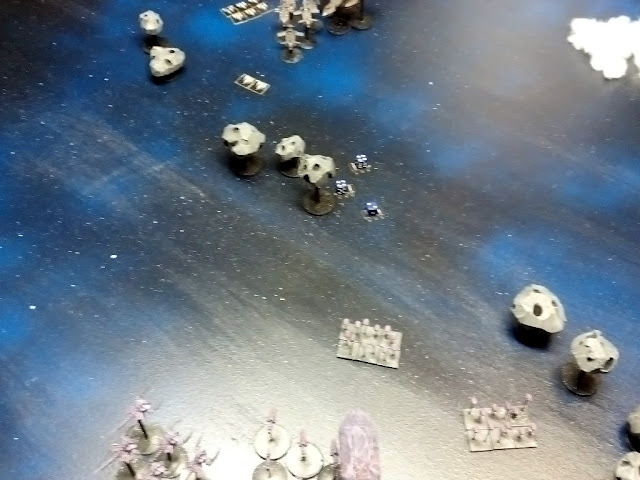 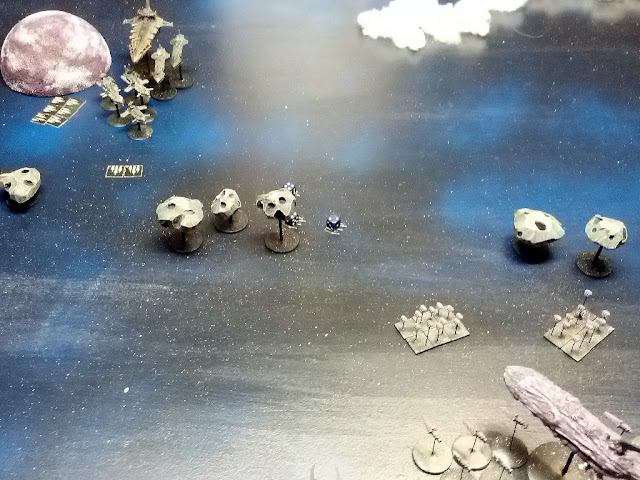 +Tyranids 2+
The Tyranid Kraken all went on All Ahead Full to get as close as possible so as to engage the next day. Each other squadron passed their Synaptic Control checks. The Tyranid batteries from the Pyrodrones and the Hive ships destroyed the Space Marine torpedo waves. 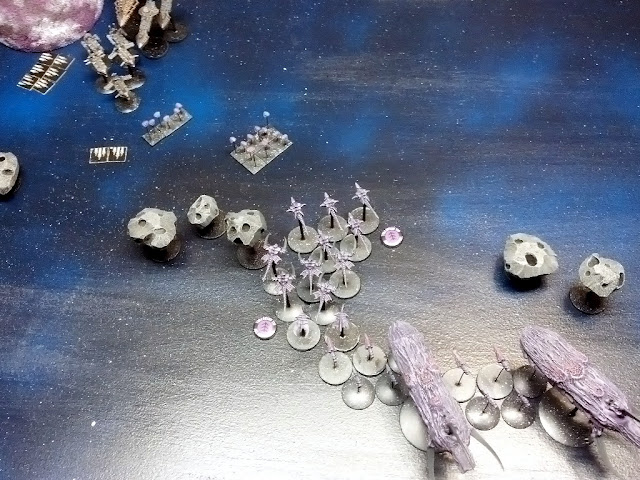 The Space Marine Thunderhawks began wading into the Tyranid Antibodies, cutting a squadron and a half down before most of them had to return to their mother-ships. 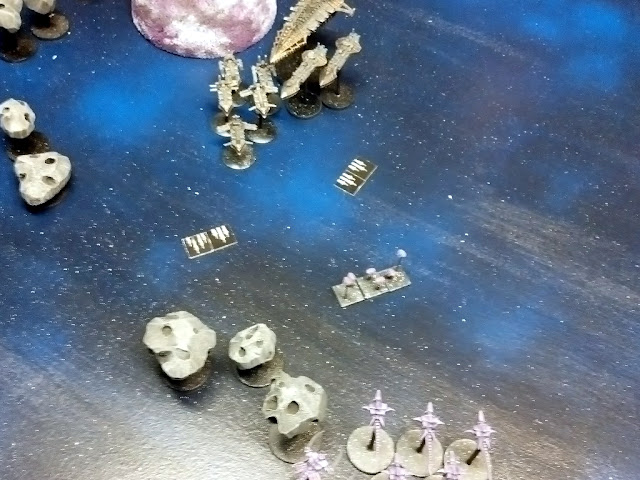 +Space Marines 2+
The Hunters and Strike Cruisers reloaded their ordnance while the Ultima Battlebarge and the Gun Strike Cruisers locked on. The entire fleet advances to pass through the gap in the asteroids. The Hunters burst forward, turn to their port side, and prepare for a torpedo strike. 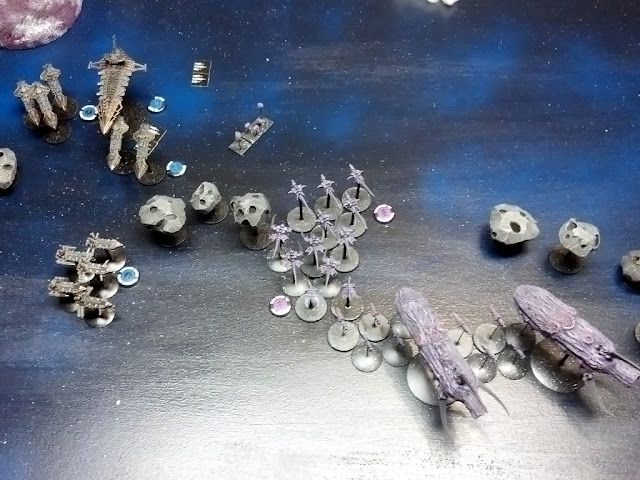 The Gun Strike Cruisers destroy a Biokraken, the Ultima kills two more of them (that's the amazing roll in the picture above, doing 6 hits), and the Hunters kill a Vanguard and 2 Claw Kraken. Quite a turn for the Space Marines!


+Tyranids 3+
The Hives immediately reload ordnance and use their last reroll.  After this, the Claw Kraken turn and engage the Hunters with their claws and batteries, killing two of them and causing them to brace for impact.  The Biokraken fly forward and do 2 hits the the Ultima Battlebarge and knock a shield down with their batteries. The Pyro and Biodrones fire at Gun Strike Cruiser 1, knock 2 shields down, and do 1 hit. The Hive ships then fire at the same target, doing 2 hits, crippling it. 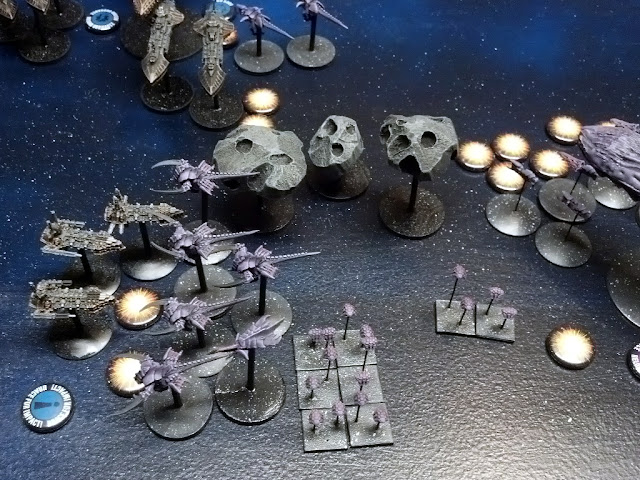 +Space Marines 3+
The Ultima locks on, the Strike Cruisers reload their ordnance, and the Gun Strike Cruisers fail to lock on. The Hunters navigate the asteroids and flee the Kraken claws. Their batteries happen to do a hit to the Biokraken! The Ultima, having pressed forward into the asteroid gap, kills 2 Claw Kraken (wow) and the newly launched Thunderhawks would the Kraken once (I believe this was a mistake in the game because none of the SM ships has ordnance reloaded).


+Tyranids 4+
All synapse passed. The Claw Kraken damages the Ultima 1 time, the Biodrone does another. Hive 1 launches Antibodies and kills the remaining Hunters (game changer).  Gun Strike Cruiser 1 (currently crippled) took 3 hit and runs from Antibodies (dorsal, starboard, and port). The Drones cause enough damage to the Ultima that its shields are knocked down (the blast markers are shifted in the picture but should be against the Ultima's base).  This was a dangerous place for the Ultima to be in because it allowed for all those Feeder Tendrils to attack it.  This was another possible game changer: The Ultima took 8 critical damages: dorsal, starboard, port, prow, engine (now down to 8 hits left), and 3 fires (!!!).  In the end phase, it repairs all the fires with a good roll. 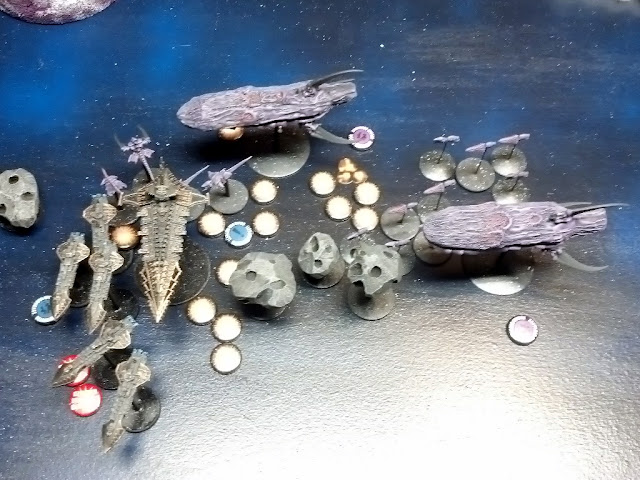 +Conclusions+
Gavin: [not received yet]
Dan:  Part of the purpose of this game was, besides the campaign, to test out the Tyranid BFG:R list.  There are some things that need to change about it: the Claw Kraken have more guns than claws. This is a problem. Feeder Tendrils are way to situational, and it makes the Vanguard more of a gun ship, but it used to always be a close combat ship. This needs to change. Really, the Tyranid fleet was tons of fun to play, but they aren't easy to work with.  Having all front facing guns makes some of their positions really dangerous. For example, Gavin out-maneuvered me in this game and forced me to turn closer to him so he could cross my T on lock-on.  This hurt like hell.  The 2 hit escort rules in the new BFG:R were very simple to use and proved to be lots of fun. The Kraken feel a bit slow at 20cm movement, but the 2 hits makes them worth it. Also, we are using the original Kraken 4+ auto brace instead of shield instead of just giving them a shield. Overall, this was a great game, loved using the new Tyranid fleet, loved using the Battlemarkers, learned a lot, and loved seeing the Carcharodons do what they do.

Posted by afterimagedan at 6:22 PM